Case Study: The Song and Dance Festival in Estonia 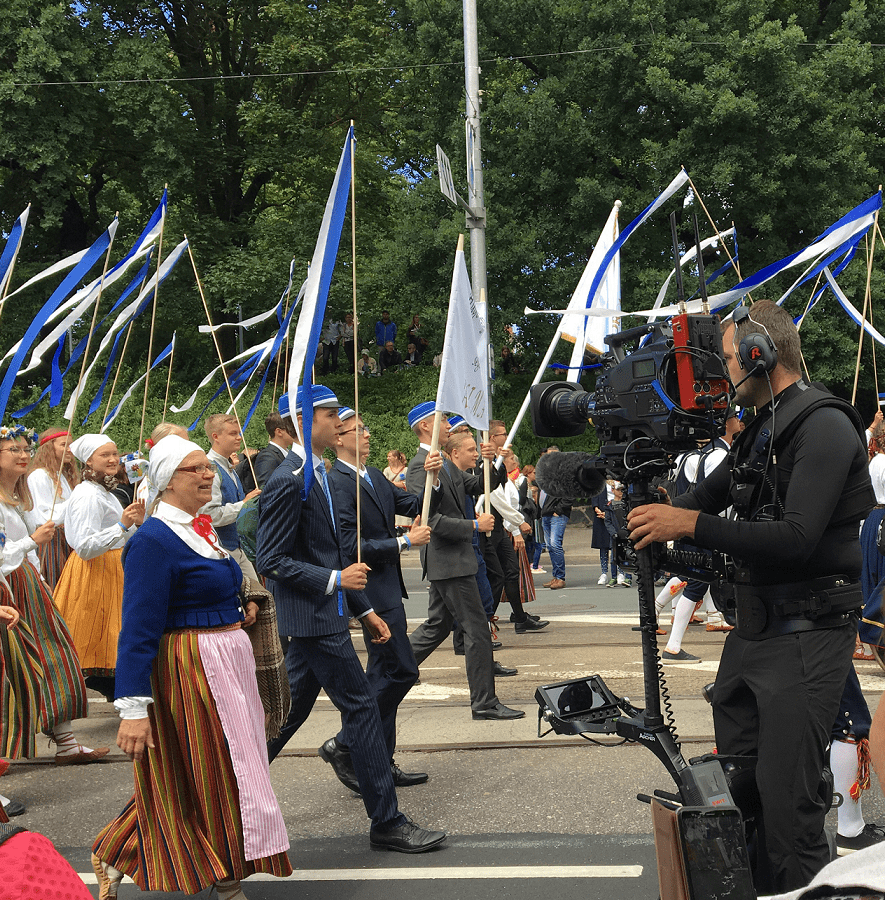 Case Study: The Song and Dance Festival in Estonia

The Song and Dance Festival in Tallinn is a national highlight of Estonia. It is the symbol of the country’s independence and occurs every four years. On the last day of the festival, the citizens of Estonia’s capital, Tallinn are gathering for a huge celebration – accompanying the song festival flame and the parade of the dancers and musicians. The event is transmitted live to all over Estonia.

This year, Estonia marked the 150th jubilee celebration of the Song and Dance Festivals. The final concert on 7th July brought an audience of 100,000 participants to the Song Festival Grounds in Tallinn.

The parade of the Song and Dance Festival is an open area event that takes place in several locations with particular venue complexity:

Realizing wireless transmission is the only solution for real-time coverage of the parade, still may pose challenges for event coverage such as the distance between the cameraman and the receiver in the OB van that cannot be too remote otherwise the video link will be broken.

Therefore, it would be assumed that for a coverage of a parade for about 1km, it is required to have several cameramen with fully equipped cameras and transmitters along the route and an OB van with receivers. And if this is not cumbersome enough then each cameraman is covering only a part of the event. As a result, viewers at home would enjoy separate videos of the whole parade. This may result in a costly production to the extent that wireless is no longer an option….

The Estonian Song and Dance festival is a unique event that reflects the spirit of the nation. The Estonian Public Broadcasting authority (ERR) faced a real challenge: how to bring the excitement of this prestigious event, from the various locations, to all over Estonia and abroad?

Estonia decided to make the 150 anniversary of the Song Festival an unforgettable event!

To allow the wireless coverage from every corner of the parade, ABonAir offered a unique system architecture based on the AB512 system together with a chain of its Fiber Coverage Extenders (FCE’s) that were installed along the route. The cameraman was free to move on a Segway holding a camera with a transmitter and an integrated intercom that allowed him to be in-sync with the director at the OB van.

Built on a bi-directional radio channel between transmitter and receiver, ABonAir’s systems acknowledge the correct acceptance of each group of pixels, thus providing exceptionally robust and reliable transmission as well as a very short delay of 7msec only.

The ABonAir Fiber Coverage Extender (FCE) allows an extended range of peripheral wireless zone coverage. It enables fiber connection between Antennas and Receiver while separation of the Receiver from the antennas can be up to 30km/20 miles. It supports HD and 4K resolution as well as all AB512 system features including CCU, Teleprompter, Video Return, Tally and integrated Intercom system. It features seamless roaming from one coverage zone to another without losing a pixel! The FCE is flexible in deployment and has a quick and easy automatic setup with no manual intervention. It can operate from a battery in Single zone and Multi zone modes in various configurations.

One AB512 system (Transmitter-Receiver), fiber cables with unlimited range and several FCEs allowed smooth broadcasts from every corner of the parade.

On a Segway – 6 Hours of a Live Wireless Broadcast

It was a real challenge to bring the excitement live from the streets of Tallinn while the 1km parade is on the move, to combine it with broadcasts from the Song Festival Grounds and bring it to every home in Estonia (and abroad)!

The wireless video link was so steady and robust that for 6 hours, a cameraman with a camera with the AB512 transmitter on, constantly moving on a sageway in the streets of Tallinn among the crowds, brought live, broadcast quality video of the parade. The genuine excitement on the streets of Tallinn was brought to every home in Estonia, the Baltics, Scandinavia and to the Estonian diaspora.

Whant to know more about this solution? Ask for your demo of the AB512 system.